What is The Connections Flywheel? 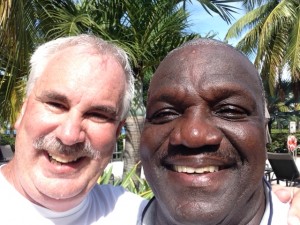 Me and my Flexercising coach in Nevis.

I often speak in metaphors with my clients. We discuss heavy things, and these abstract ways of thinking, leading a team, and reaching business goals are better understood when linking a process to an inanimate object or a relatable life occurrence.

If you’re a frequent reader of this blog, you might be wondering, “What on earth is this flywheel thing you’re talking about and why do I want to impact it?” or “Are we still talking business here? I’ve Googled and it looks like you’re talking about a decade-old movie, rotational energy, or a new workout craze.”

The latter two are close, in that I’m talking about how actions, like the rotating mechanical device that is used to store rotational energy, can impact the output in a big way. It’s about building momentum that will keep working hard after you’ve put in the effort. And yes, it’s about connecting with other people.

Here’s the thing: people resist connection with others because they think it takes too long. There’s time, effort, and research involved, so they automatically assume it will take forever. This is an illusion and it is very surface-level thinking.

What really happens when you connect with others?

In reality, it builds it up. The effort you put in comes back three-fold. Yes, it takes time, effort, and research, but you’ll get back what you put in. The real time waster is when you’re chasing new customers. And if you’re shoving a “Go and No-go” process to the front, customers catch you in this.

The Coach Gets Coached

Recently, someone coached me. Not in a way that relates to the way I do business on a surface level, but similar nonetheless. You see, I went on a trip to the Caribbean Island of Nevis. There was a lot of golf—you know, one of those strenuous, all work and no play kind of ordeals.

Each day, before my golf game, I went to a fitness class was taught about Flexercising. It wasn’t easy, and I just kept wondering, “Can’t I just go out and go play?” When I complained, the instructor would remind me, “You called me because you’re ready to exercise.”

It was painful for a moment, but as I got through it I learned that the things he was saying were true: I felt better for the next seven days, even after I stopped the stretching/exercise hybrid style of fitness. And, better yet, I golfed like I did ten years ago. I had the energy of a younger man.

It’s all relative. You want your energy to be corrected, and put forth toward actions that will be impactful toward the bottom line. Although it may be hard to get it moving, once that force is moving, it’s rolling—and it’s rolling fast. Right where you want it to go. (Just like that ball was.)

So Here’s the Bottom Line…

Impacting the flywheel is about initiating relationships that will build momentum.

Once you put in the effort of research, time and effort, energy doesn’t get stored. It begins to multiply.

It’s not always easy, but in order to be impactful and leave behind something that will resonate, you’ll have to put the work in.

Wayne is the CEO of RESET, a public speaker, and author of the book RESET: What I Want You to Buy is...Stop Selling. After having spent twenty-five plus years in the project delivery industry with such companies as PSA/Dewberry, Bovis, and Gilbane Building Company, Wayne founded the firm and created The Connection Process to help bridge the communication gap between service providers and business executives. Wayne, by questioning, demonstrating, cajoling and pushing RESET clients, has developed a unique ability to crystallize concepts that ultimately help clients identify new ways to compete and grow.